Types of Personality Tests
There are many types of personality tests; let's take a look at the ones most commonly used.


Myers-Briggs Type Indicator (MBTI)
This commonly used test analyzes and classifies you into one of 16 personality types by measuring how you perceive and prefer to engage with the world around you.
The MBTI is based on a theory proposed by Swiss psychiatrist Carl Jung. The MBTI was published in 1944, and new editions have been published several times since then.

Sixteen Personality Factor Questionnaire (16PF)
The 16PF is a broadly used test that measures normal personality. The test is not only used for pre-employment assessments, but is also used by psychologists and other mental health professionals to help diagnose psychiatric disorders. This test classifies your personality as either low range or high range in the following areas: warmth, reasoning, emotional stability, dominance, liveliness, rule-consciousness, social boldness, sensitivity, vigilance, abstractness, privateness, apprehension, openness to change, self-reliance, perfectionism, and tension.

DISC assessment
The DISC is based on a theory by the psychologist William Moulton Marston; it centers on four different personality traits: dominance (D), influence (I), steadiness (S), and conscientiousness (C). The DISC is commonly used in recruitment.

Big Five Personality Test
The Big Five, or five-factor model is used to identify the five basic aspects that make up human personality: openness, conscientiousness, extroversion, agreeableness, and neuroticism.
Initially developed in the 1970s, it’s been reaffirmed several times via independent research over the years, and is considered one of the most reliable types of personality test.

Can you prepare for a personality test?
Unlike most aptitude tests, there are no right or wrong answers in personality tests, and generally, there is no "perfect" personality type. Trying to fake a personality test is very hard and is definitely not recommended.
That does not mean that you cannot prepare. Knowing what to expect will help reduce test anxiety and increase the likelihood of completing the test correctly. We suggest that you try a no-risk personality test before you take the real pre-employment test. Look below to try our free personality test based on the five-factor model. 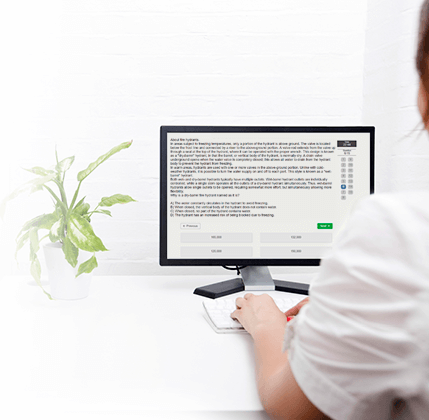 Try our personality test and receive your free personality profile. No e-mail or sign up required.